Sayunyan, a close friend of Himetan, talks about how she feels regarding Himetan's graduation announcement.

Himetan announced her graduation.
I never really believed it until now, but as she announced it officially, it finally sunk in. To be honest, it makes me feel both sad and lonely. While in reality, thinking of Himetan herself, I should treat her normally; have fun, like we’ve always had. It’s good that she’s taking care of herself, and I don’t want her to overexert herself. I think she’s really amazing for continuing to be an idol until the very end, despite already being at her limit. Eventually, when the time comes, I want to be able to congratulate her on her graduation from the very bottom of my heart. I spent a lot of time together with Himetan during the Under Lives, and we’ve talked about things we haven’t even told our families… The bond between us is a lot deeper than most people would think. And that’s exactly why, when she returned from her rest and told us that she has decided to graduate, I didn’t really know how to deal with it; didn’t know what to say to her. I didn’t wanna tell her something trivial like “do your best” or “I’ll cheer for you” Instead I was thinking hard, so hard my chest began to hurt, for something only I could say but… In the end, all I could do was joke around and laugh with you… I’m sorry!! It probably didn’t account for much in the end but… I feel crying isn’t the way to do it, though in the end, I will probably cry anyway. From now on, I hope you will continue to light up the world around you with your smile. And I hope the road ahead will be one filled with happiness. Just because we won’t be together as often doesn’t mean anything will happen to the relationship we’ve built so far. Let’s continue to spend time together, laughing and joking around, like we’ve always done. Until your graduation, it’d be nice if the three of us could go shoot at an onsen again. This time without pranks. If not possible, let’s just do it in private. Ah… All the songs we’ve performed together on stage suddenly began playing inside my head. This is bad… I shouldn’t be crying right now. From Sayu 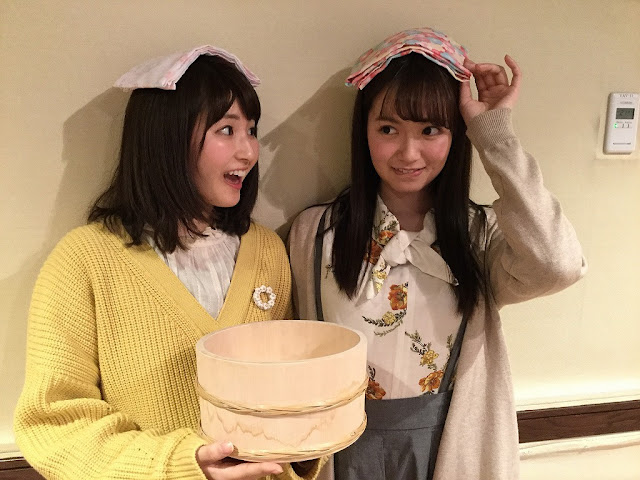 as well maybe her grad concert is UNDER LIVE itself..

I can't hold back this tears.

I'm not even a Himetan-oshi.